"There are no secrets to lambic brewing..."

This follow up to my first post of the Cantillon brew day will be mostly a list of things that came up throughout the day from conversations with Jean, trying different Cantillon beers, and anything else that came up on brewday but didn't fit well into the description of Cantillon's brewing process. And some more pictures. It's a lot less brewing information but I think it is some interesting stuff for approaching new ideas with non-standard lambics and fruit lambics.

It seems that Jean must be constantly thinking of new experiments/blends/lambic treatments because he mentioned at least 5 ideas to me that he's working on or planning. Here are some of those experiments/ideas. Hopefully this gives some ideas to lambic homebrewers for new things to do with a lambic base. I know they definitely got me thinking.


Half en half - An old Brussels tradition, and it is exactly as it sounds. A 50/50 blend of two beers. The idea of blending beers at serving time is not new to me but I wouldn't say I've done much beer blending of any form aside from a bit of
blending similar beers at bottling to smooth out rougher characteristics and gain complexity. And I certainly would not have thought of blending lambic in the glass. But I have to say I will certainly do it in the future. Jean produced what he called his favorite blend for a fellow homebrewer/lambic enthusiast I met at the brew day named Ben to keep Ben refreshed while he shoveled out the mash tun. The blend was equal parts Fou Foune and Rose de Gambrinus. Man was it good. So good that I later made my own with Fou Foune and a pour from a bottle of Lou Pepe Framboise. The soft floral character of the apricot and the more acidic bright fruityness of the raspberry work really well together, and the balance of the two was great. I definitely think the blend was better than either of the component beers on their own. And if/when I start adding fruit to my lambic based beers, I definitely intend to blend different fruit treatments at bottling so I can have a pseudo half en half without opening two bottles at once.

Riesling lambic (barrel sample) - A dry riesling has a lot in common with a sour beer such as lambic, both being light bodied, fruity and acidic. In terms of adding a new depth to lambic, I'm not sure what riesling juice might do (I haven't tried any of the other sours out there made with riesling juice) but I can say at this point the Cantillon riesling lambic tastes great. Judging from the posting date on Cantillon's facebook page, this blend was probably made around 2 weeks before I tried it. At this point is has much of the riesling fruityness and the sweetness of partially fermented riesling (see side note below). There is a great mix of acidity from both the riesling juice and the young lambic. A touch of the 'petrol' character that rieslings sometimes have, but it was mild and definitely not off-putting.

Side note - The part of Germany where I'm currently living, Rhineland Palatinate, is the country's leading region for wine production. During harvest season there is a popular partially fermented wine called federweisser, which has a slight carbonation due to the active fermentation. You can find it in varying degrees of sweetness, from something that is hard to differentiate from grape juice to almost finished wine. I didn't know what it was the first time I saw people drinking it at little kiosks which are all over town, and it looked kind of creepy. It is hazy from the still active yeast and is a pale green color. Bottles have only a loose cover (no seal) because they are fermenting when you buy them. Anyway, I think it is reasonably pleasant and shares some major common ground with the current state of the Cantillon riesling lambic experiment.

50N 4E - If you didn't know about this beer before, it is gueuze made form lambics aged in cognac barrels. I think this is a great combination of spirit barrels and beer. The cognac is smooth enough to blend with the lambic flavors. It adds a nice perception of sweetness softens the lambic acidity while leaving plenty of room for the lambic character to come through. Jean said the current blend, bottled in 2012, is 25% cognac barrel aged lambic and 75% normal lambic, but for the next bottling of it he plans to flip those percentages and use 75% cognac barrel aged lambic. I'm interested to see how that turns out, because at the current 25% cognac barrel aged level I think the spirit quality comes through prominantly and softens the lambic very nicely while still letting the lambic part be present. So for the homebrewer, if you were thinking of making a richer lambic with some spirit character (or if you weren't before but are now), I think cognac is a really good choice.


Amphora update - In January 2012 Cantillon started experimenting with aging lambic in amphoras (and another link). The first lambic batch started in the amphoras and was aged 14 months. Jean said that he felt this batch spent too long in the amphora and became too rough and minerally. He is planning a second batch to be aged in the amphoras, but this time he plans to take 1 year old lambic from barrels and transfer it into the amphoras with a  bit of fresh lambic wort to kick start an active fermentation to protect the wort from oxygen in the transfer and amphora environment. Then the lambic will age in the amphoras for something on the order of 5-7 months. This seems to be a good compromise of getting character from longer aging without the roughness Jean was getting from extended amphora aging.

Other miscellaneous info
Blending/bottling - Jean said Cantillon doesn't bottle if the lambic temperature is above 20C and that bottling usually stops around May. I know I've seen bottling in action during the summer and I've seen dates on bottles of Cantillon fruit lambics to confirm this, so I suspect that I didn't catch that he was referring only to gueuze blending/bottling. This seems to make sense. For the fruit lambics, the time he can add the fruit is dictated by harvest and bottling time is determined by when the lambic needs to be removed from the fruit, so bottling may have to take place over summer. But for gueuze the timing isn't pre-determined by harvest and maceration times, and it makes sense to save bottling for a time when the lambic is done with the microbial, and especially bacterial activity peak seen in summer (as this paper shows). I hadn't really thought of this, but it makes complete sense for the quality of the gueuze. And the overlap with brewing season provides freshly emptied barrels for new lambic to go into, though it probably also makes for a very busy winter. It seems other brewers/blenders are doing this as well, as Tilquin recently posted about the start of their blending season.

I'll close this off with a couple more pictures of the coolship in action and an explanation of the quote at the start. It is what Jean said to me as I was thanked him for the day and all the time he spent talking to me. He there are no secrets in lambic, and that I've seen everything he does. Then he thought for a second and said,

"There is one secret to lambic... Love. Love and passion."


And from watching him brew, you can feel the serious passion he has for the making quality lambic. I enjoyed Cantillon lambics before and respect what they do and what they have done for lambic. But after seeing the process I have a whole new respect for everything that goes on there. It takes a lot to open up your brewery to hundreds of people so they can watch you brew for a day. And to brew the same base wort (nearly) every brew session while still coming up with new great ideas for the final product definitely takes passion.


So thanks to Jean, and to all you for reading this (and the previous) post about the Cantillon brewday. 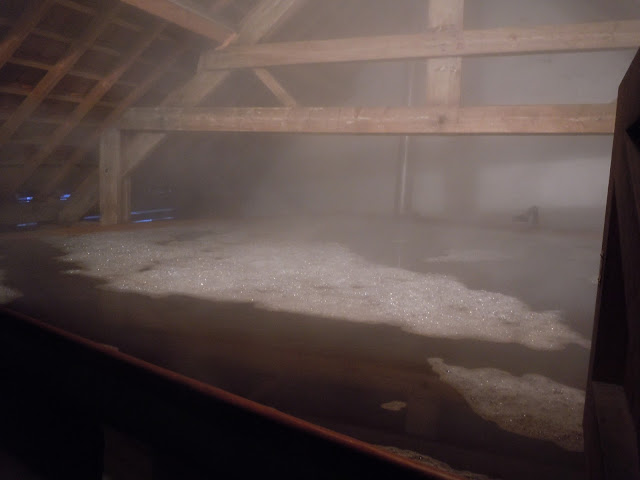