After visiting a couple of different Belgian saison breweries over the past month or two (and some others over the past couple of years) I thought I'd give a bit of insight into the different modern takes on this style. And this also gives me a chance to put up pictures I have from some of the different leading saison breweries. This is a bit more of an overview and the more specific details on what I took away from different breweries will probably be saved for posts dedicated to those breweries.

As I mentioned in my about me section, the saison beer style is held together more by spirit and feel than by the sort of specific technical parameters you'd find in most beer styles. So while the strength, color, presence of spices, hop levels, etc. in different saisons may vary significantly, all the top commercial examples are dry, refreshing, yeast-driven beers with exceptionally low finishing gravities. Here is some of what I've seen from what I consider different leading Belgian commercial brewers of this style.

Brewhouse facilities
Saisons, sometimes called farmhouse ales, are often romanticized as being rustic beers. While this is certainly true for the history of the style, not all commercial breweries (including many of the best) fit into this rustic ideal. Some of the breweries located in the center of villages/towns fit perfectly within the farmhouse feel/image while others out in the countryside have a modern setup. Some breweries (most notably Brasserie a Vapeur) are using some equipment over 100 years old while others, such as De Glazen Toren, have a beautiful new brewing facility that they acquired within the last 10 years or so. So while the style may hold a farmhouse connection to some, the farmhouse connection is certainly not ubiquitous.

Saisons are generally yeast-driven beers so the fermentation is going to control the final product. Some breweries are using pure cultures for fermentation and some are using mixed cultures, both to beautiful results (though I'm not sure all the breweries with mixed cultures are intending to do so). Some brewers, such as Dany Prignon at Fantome, will at times choose different yeasts and bacteria to add for some of their different brews. So while the fermentation (and the fermenting organisms) may vary greatly, the fermentation tanks are the only consistently reasonably modern equipment I've seen in all the saison breweries I've visited. I suppose that this is unsurprising given the advantages that conical fermenters and clean-in-place systems provide and because while a brewery only needs one mash tun and boil kettle, they will need many fermenters. There was still some reasonably variability between some of the breweries I visited but the variability between fermenters within a given brewery surprised me more than the varying fermentation setups at different breweries. Especially when considering the equipment differences on the hot end.

Spices and 'feel'
My favorite more typical saisons are either dry and rather hoppy (such as Dupont, Thiriez, and De Glazen Toren) or much more mild with the hops and spiced with a blend such that no single spice character seems to dominate the beer (such as Fantome and Brasserie a Vapeur). Achieving the appropriate balance, character complimentary to the yeast, and choosing some original spices is important here. In my mind Dany at Fantome is the master. He doesn't keep a written log of what he does but he's used so many different spices over the years that he has a feel for what levels of which spices are appropriate for the balance.

This sort of intuition or feel that I observed with Dany is something that stood out in the saison  brewers (and for that matter lambic producers as well) that I visited. It goes beyond recipe formulation though, as I saw many parts of the process controlled by feel or quick observation rather than measurement. And in general I think this is a big difference between many commercial brewers and most home brewers. Home brewers often jump around to very different styles, brew less frequently, and have more regularly changing equipment, environment, and process than commercial brewers. And even when the commercial brewers are regularly brewing something new or something they haven't done in a year or so (again taking Dany at Fantome as a perfect example), the feel they have for the style and how to use their ingredients makes a big difference.

Many homebrewers will often hear the advice that they should repeat the same recipe to get a hold of their process, and I think this is really important. But for those homebrewers out there who would get bored with this and lose what they enjoy in the hobby, try something like what Dany is doing. Find a style of beer you like making and/or drinking. It could be pale ales, it could be saisons, it could be stouts, whatever it is you really like. And brew some similar batches in a row. You can change parts of the recipe or parts of the process but it will still give you an idea about what different ingredients and techniques will contribute to your final beer. Whenever I get a new pack/vial of yeast (especially considering that yeast pitches can be one of the more expensive parts of brewing), I grow it up and split my starter for multiple batches in a similar family or style. Then I'll brew these batches over the next month or so. Keeping this approach of brewing similar styles with similar process and/or ingredients for a few batches in a row helps get a hold of the influence of my ingredients and process. There is no substitute for actual brewing, the closer together the batches are the better, to gain a feel for your system and an intuition for how different ingredients and processes will influence you beer.

Closing news - note: edited Jan 2015
And I'll close here with an exciting piece of saison-related news. Historically, some saisons would likely have had a character similar to younger lambic from the extended conditioning period and the non-microbiologically pure fermentation. And there is some evidence of a portion of lambic being blended into saison (for a good quick history of older saisons check out the Yvan de Baets chapter in Phil Markowski's Farmhouse Ales). This would certainly aid in the refreshing qualities of the beer and this sort of idea can be seen in some commercial beers today. Most notably Cuvee de Ranke, which is a 70/30 blend of a hoppy pale beer and lambic from Girardin. Edit: the info on the De Ranke website describes this a bit differently, and perhaps the base beer isn't as hoppy as the shelton website would lead one to believe. I've had it on tap in Belgium where it tasted rather hoppy and not very sour, lending credit to the Shelton description, but it may have been a case of a mistake in which beer was put on tap.

Edit fall 2015: An earlier version of this post included information that Jean at Cantillon was interested in some saison-related trial projects. I interpreted this to mean actually doing a bit of brewing with pitched yeast, but I believe I was wrong on that. I've heard no further mention of this so perhaps it isn't going anywhere. It would still be awesome, but I think focus is going elsewhere like toward the new facility expansion and this idea is on the back burner and/or shelved. Or, I think more likely, I was really excited by the idea and didn't fully understand what he meant by it. Jean is involved in saison projects by providing his lambic for blending with saisons produced elsewhere (such as a De La Senne and Hill Farmstead) and other beers (like with Agullons and Birra del Borgo (before the buyout - ed May 2016)), so this is more likely what was meant by his interest in saison-related projects. I expect he will continue to be involved like this and this is probably what he meant when he said he was interested in projects inspired by historic saisons. And I think my enthusiasm let my imagination run a bit. I also got a bit of a feel that this was a bit more of a longer term dream/goal, so it may be possible that he will expand these collaborations. I'll update if I learn of any tangible developments.

Edit May 2016: While I was certainly to quick to post about Cantillon experiments, I was also too quick to edit back that post. I won't say much more here and will leave any further discussion of this to the people involved if/when the time comes. On the whole the original information was valid - that Jean has an interest in continuing to produce quality traditional lambic as well as see how his lambic could interact with other beers/worts.

Alright, that's all. I'll plan to write up some specific brewery visits but thought that this general comparison would be a good way to get some ideas out and set those specific visits up. 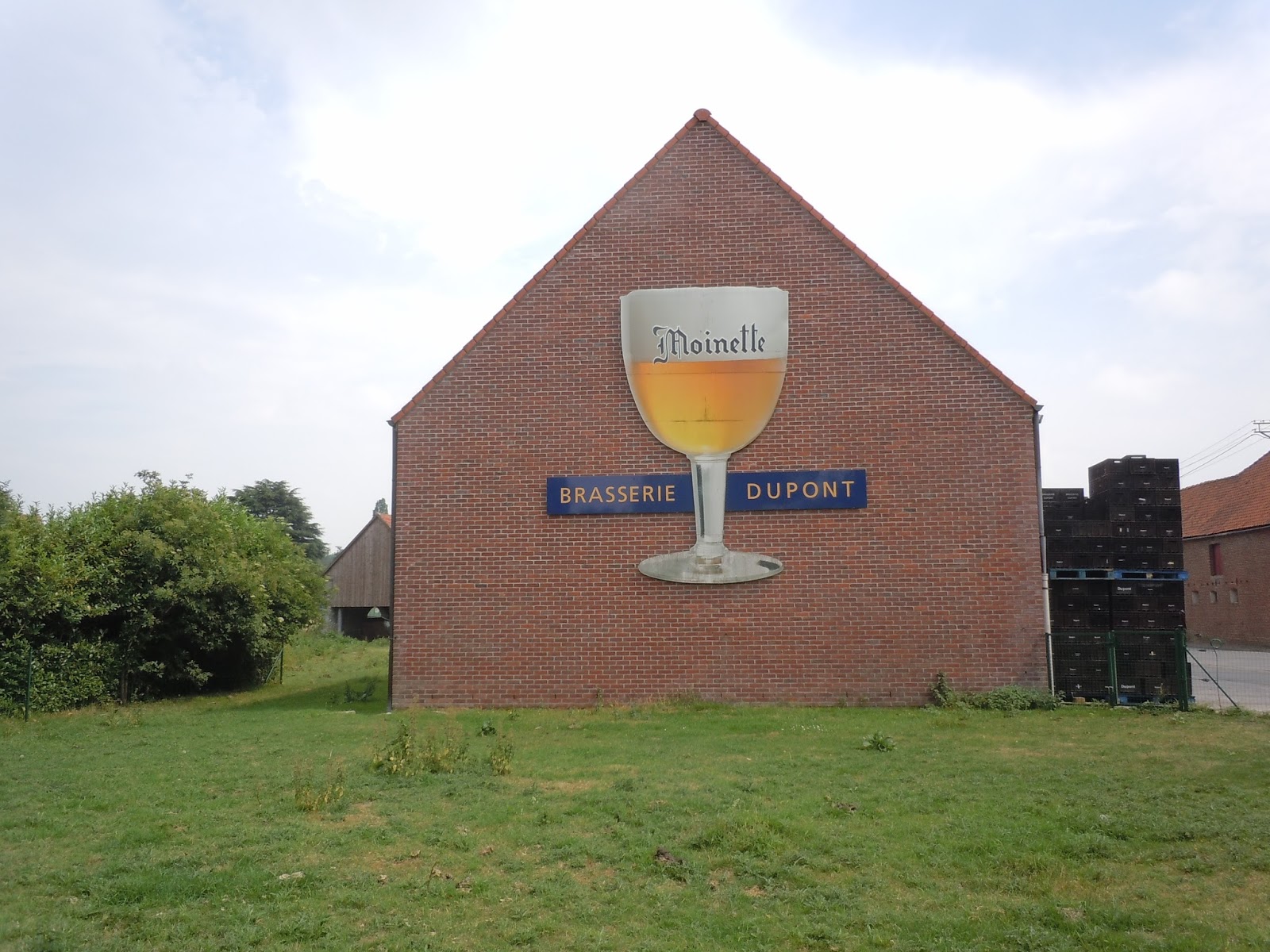