I often find that I have a lot of individual bottles of beer (homebrew and commercial beer) sitting around waiting for some occasion where I can give them the focus I want. Consequently, I always turn to my recent batches of homebrew for a beer I can enjoy without as much focus. This has the downside of putting off a review, but I like that it gives me some opportunities to think more passively about the beer and come up with some ideas before sitting down to the full review. And often times I find that although the beer may be carbonated after a week or two, it benefits from a bit more conditioning/mellowing time and some previously rough characteristics may have softened more. I find that especially true with many of my saisons, and many of the leading commercial Belgian/French saison brewers have a bit more extended aging time, either in bulk or in bottles, after the fermentation is complete. Anyway, I've finally gotten around to taking some tasting notes on the Belgian single I bottled about a month ago. 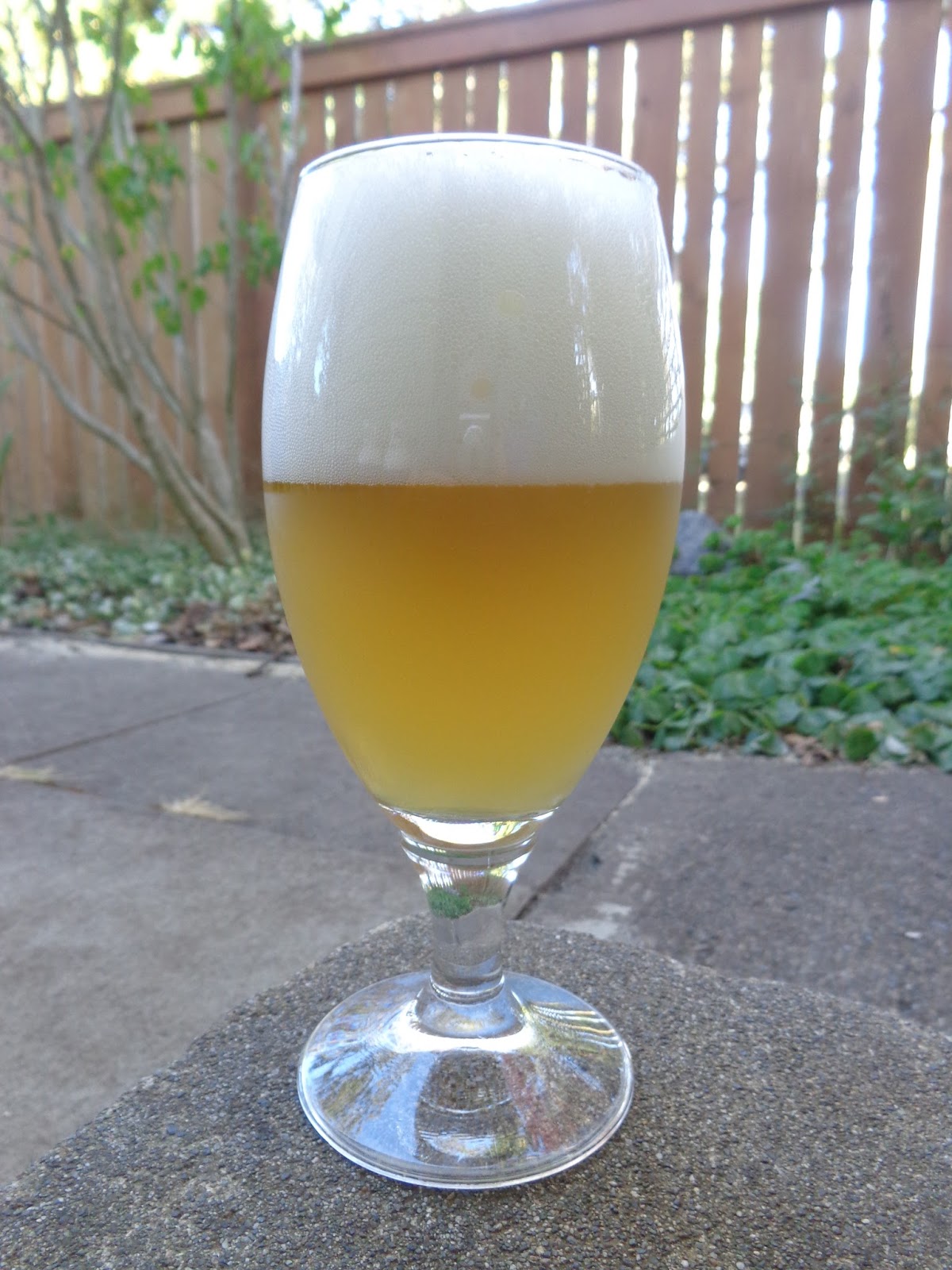 Aroma: Very strong noble-type and other European hop presence, the hops smell a bit like hop drops candy (or a really fresh bag of European hops) in the intensity as well as the profile. The Styrian Goldings seem to come through stronger than the Saaz. Yeast character is relatively restrained but there is a nice fruity character with pear and mellower citrus like blood orange. There is a bit of clean crisp malt in the background but overall hops dominate the aroma and yeast lends a nice milder support.

Appearance: Dark gold, fine haze (the haze in the image is mostly condensation), large rocky white head with fine bubbles. The head retention is pretty impressive and a thick lace is left. The appearance was pretty much my ideal for this type of beer.

Taste: Strong hop character, which dominates the overall flavor profile. Great forward noble and spicy/earthy hop flavor, moderate/high bitterness (but appropriate for the balance). There is a bit of vegetal/leafy matter in the finish, the sort of thing one might get from too many hops/too much contact with hops. A nice mild fermentation fruity and floral character (mostly pear with some citrus as well) and no bubblegum or banana (which I was happy about). As the beer warms the fermentation character becomes more apparent. Overall this is assertive for it's strength and well on track to what I was going for.

Mouthfeel: High fine carbonation and a light crisp body. Perhaps the final gravity could come up a couple of points or I could try in some other way to increase the body a small amount (my FG was 1.005, which was a bit lower than my target). But as it is, it is pretty refreshing and I like that. There is a small amount of astringency/plantyness in the finish.

Overall Impression/Future changes:This is pretty nice overall. my main complaint would be the plantyness of it. That plantyness isn't too strong, but as it is something I don't want there at all, I'dd like to try to not get it in the next batch. For the next batch I think I'll try to drop the hop load a bit and maybe also drop the total IBUs. I may also shift a small amount of hops to earlier in the boil to serve as more of a classic bitterness addition. I approached this with more of a North American 'hop bursting' type brewing process and I am reasonably sure that this is not what is being done at the breweries making this sort of beer in Belgium. I'll also try to do a better job of keeping hops out of the carboy while transferring out of my boil kettle. I think in beers where I may be pushing limits when it comes to having a vegetative taste come through (especially when the rest of the beer is relatively delicate and fermentation temps might be elevated) keeping carry-over hops out of the primary becomes especially important.

The malt characteristics are good for this in that the malt is light and crisp and lets the hops really shine. I think maybe I'd like a bit more fermentation character, but not much. It is really easy with Belgian styles of beer to overdo it on the fermentation. Especially when bubblegum and banana esters start to develop (which I generally try to avoid/limit in Belgian beers). I'm happy with the fermentation character I got (and happy to miss many of the characters I didn't get) so I won't manipulate fermentation temperature too much. Also, as the beer ages more in the bottles I am noticing the fermentation profile come more forward in the balance.

A couple days after writing these notes I got the chance to have a nice commercial example of this style from the US - Russian River's Redemption. My quick comparative notes from that are that at first Redemption seems much lighter on the hops. And while that is true, Redemption is still appropriately hoppy (maybe not as hoppy as the Westmalle Extra or the Westvleteren Blonde), the refined nature of Redemption's hop profile makes it seem less hop forward. The other main difference is that Redemption has a stronger fermentation/yeast profile. I'd like my next batch to fall a bit in the middle of the two in regard to yeast profile intensity.
Posted by Dave at 7:05 PM