The goal for my petite saison, as I talked about in the recipe and brewday post, was something like the excellent low gravity saisons I had in Belgian and northern France (Dupont's Biolegere and Thiriez/Jester King La Petite Princesse). I wanted something very light and refreshing around for the heat of summer and this beer matched that very well. Here are my tasting notes and any changes I might try to implement in future batches. There will definitely be future brew of this and I even have a re-brew of this beer currently fermenting.

Aroma:
There is a great fruity and floral yeast character (citrus and peach/apricot are most prominent, with some tropical fruit) typical of saisons. There is a very mild chalky/minerally character that I find in quite a few commercial saisons which I find pleasant in low levels such as it is here. There is some nice noble-type hop spicyness, possibly mixing with yeast phenols, which counters the floral/fruity character quite well. The yeast character really dominates the aroma and I don't get a whole lot of hop and malt coming through here. 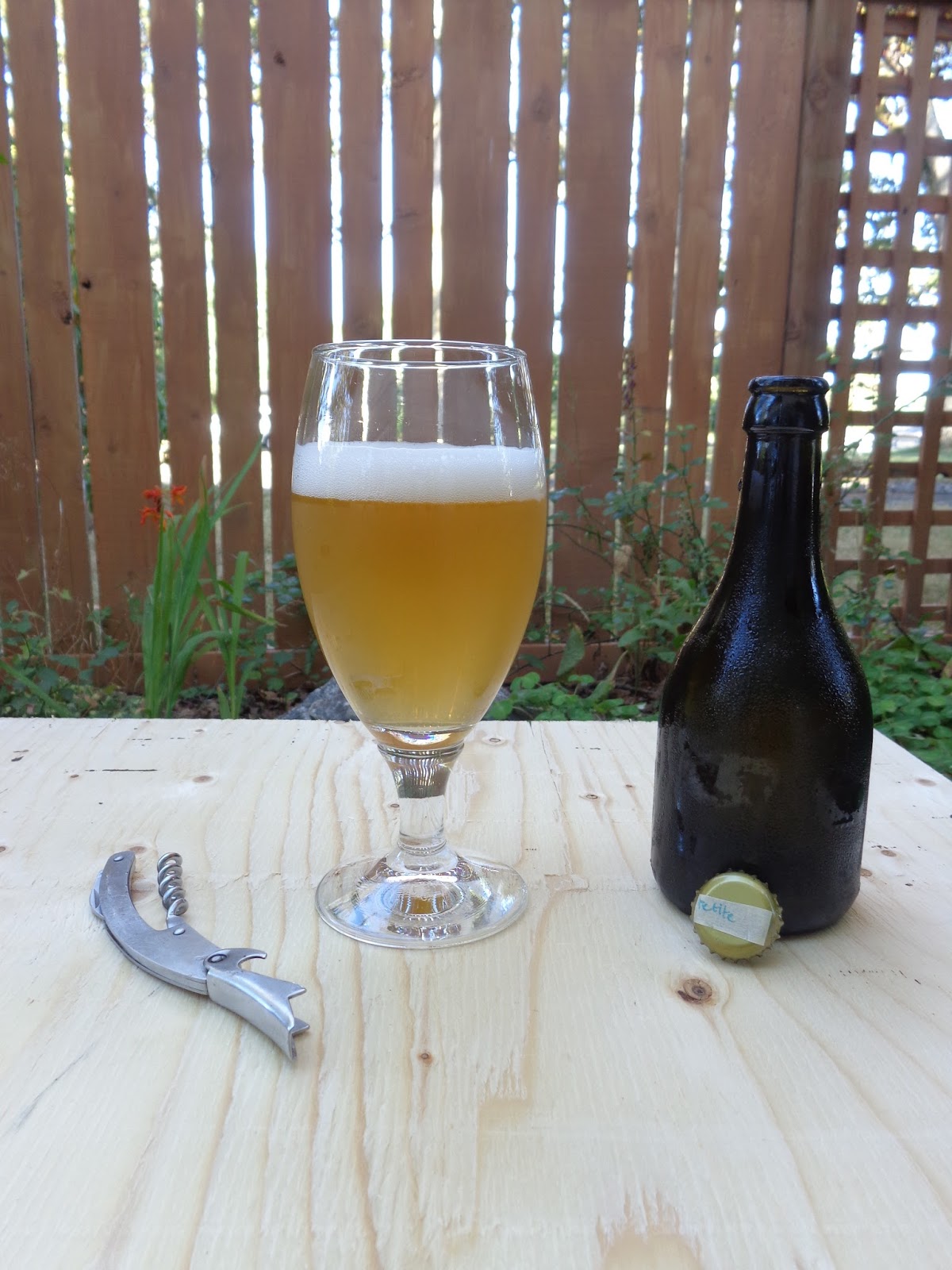 A good white head, not as giant as in many other examples but certainly there and with good retention. Medium bubble size, but settles to a fine and pretty ~1cm mousse-like head. The color is hazy gold though I've had other pours that were pretty clear, so I probably didn't let this bottle settle enough.

Taste:
The fruityness is forward, with a bit more pear than the aroma suggests but still with citrus and peach as the most prominent fruits. There is a mild pleasant grainy character. The malt comes through surprisingly well for a beer with an OG this low, with a nice Vienna/pale Munich character in the finish. The hop bitterness balances the beer really well in the finish. Some milder spicy hop character supports the yeast well but the fruity yeast character dominates, with the malt coming through a bit stronger than the hops. As the beer warms the hops come up in the balance and the malt goes back. The aftertaste is refreshingly dry hop spicy and grainy malt, leaving a crisp finish and inviting another sip. And another, and another...

Mouthfeel:
Creamy light body with high carbonation and a pleasant crisp finish. This is exactly what I was going for in this beer. It is super refreshing and very dry. It seems fuller than the final gravity (1.001) would suggest, which I suspect is due to glycerol (which I discuss here and mention here). This is a compound that adds to the body of a beer which yeasts produce during fermentation, and saison yeasts like the ones I used in this batch produce more than typical.

Overall and Thoughts:
I am really happy with how this came out. It matches almost all of what I wanted, and exceeded my expectations a bit in the malt character. It's dry, light, and super drinkable but with surprising body, which is appropriately light without being too thin, and has surprising malt character. It is comparatively easy to make a low OG beer hoppy (as hops are independent of beer strength), but getting sufficient yeast character when the yeast aren't fermenting much sugar, and especially getting enough malt character when the malt levels are by necessity lower, can be tricky. Even more so for the malt when the final gravity is so low as it is in this beer. So I am really happy with how this malt came across. As I detailed in the recipe post, I used mostly malt produced by a local maltster including a light pils (1.5 L) and a light Munich (6.5 L). If you don't have comparable malts available I would use the palest Munich you can find and maybe substitute 25-50% with Vienna malt to replace the 6.5 L light Munich I used in this recipe. Another pils of the more standard ~1.7 L should be ok for the pils substitution, but I do think some nice grainy character might be coming from using a slightly lighter malt. But that's probably what I'll do in the future when I don't have any more of these specific malts around.

Other than that I don't really think I'd change much. My target was for a beer that was a fair bit lower in strength but through a combination of about 3-4 extra points in the OG and a couple points lower in the FG my ABV is 4.0% instead of the 3.0-3.5% (preferably closer to 3.0 %) of my target. I may try to drop the strength of this recipe down in the future but I am a bit torn about it because I am quite happy with this batch. Either I'll go back to the drawing board on a saison around 4-4.5% and drop this recipe down a bit, or I'll create a whole new recipe for a lower gravity saison and keep this about where it is (or maybe a touch stronger). I suppose I'm leaning toward the first option here to differentiate this recipe more from my average strength, pale, relatively hop forward saison recipe of around 6.5% that I am happy with. But we'll see.
Posted by Dave at 6:16 PM