I've been experimenting a bit with ways to add mild acidity to certain beer styles before beginning primary fermentation. For this recipe I fermented a portion of a previous beer with a similar grist with Lactobacillus until I was happy with its acidity and then blended that portion back into the boil for this brew day.


Aroma: Peachy and citrus, the tartness is there, tangerine, strong Wyeast 3724 floral aroma. There is more Wyeast 3724 character in the balance than I feel I usually get from the yeast blending. There is a pleasant mild minerally character and a mild funkyness/rustic aroma (enough that one might wonder if there is brett in here).

Appearance: Thick fine very large white head (I gave a bit of an aggressive pour) with excellent head retention. The beer is a finely hazy straw color. It is pretty and hits what I am looking for appearance-wise in a saison. 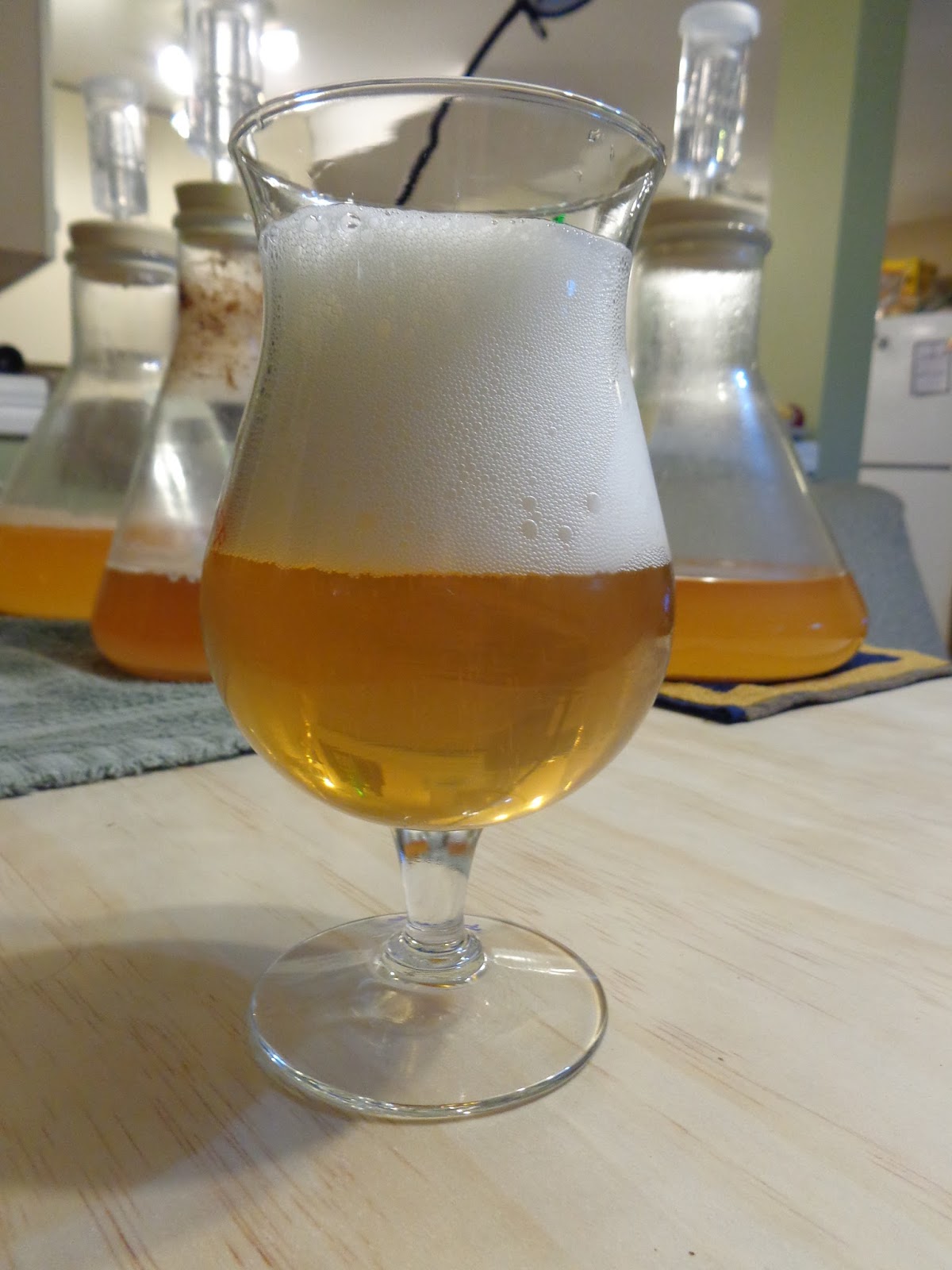 Taste: There is a nice dry citrus fruityness (tangerine and mild lemon) and floral yeast character. The yeast character is strong and pleasant with some peach in there with the citrus. The hops come through a bit muddled, which is influenced by a rough planty hop character in the finish. I'm not sure if that is due to hop material making it into the fermenter and sitting warm with the beer for an extended period of time or related to the lower boil pH with the hops (or both, and more on this below). But it is definitely something I'll need to work on for future batches. The yeast fruityness becomes more prominent in the balance with warmth and the hop flavor becomes lower in the balance with warmth. The acidity is a bit higher than I'd like it to be for this beer. There is a nice hop bitterness before the roughness comes in.

Mouthfeel: The beer has a pleasantly prickly high fine carbonation. The body is light with a nice smoothness and the lightly tart finish is great. There is a bit of warming in the finish (probably due to both the acidity and the alcohol). That planty character in the finish is noticeable in the mouthfeel as well as the flavor.

Overall Impression: This beer is good but not where I wanted it to be. For a first order try with this method I think I got some good information out of it and I like the way the acidity is working with the yeast character. There is a hint of flavor I've gotten from stressed 3724 before, so the low pH might have stressed out the yeast a bit (or maybe it was something else). Either way it is really low level and I don't mind it. I would probably bring the acidity down a bit on future batches anyway. I don't think the low fermentation pH had many effects on the yeast and I think if I lower the acidity a bit, as I wanted to do independent of it's influence on yeast character, I think the pH wouldn't be a problem for the yeast character. And that seems to be going away with more conditioning time. Overall the beer is also improving with more conditioning time.

The aroma is great and overall the flavor is good. The acidity brightens the beer and lightens the body. The flavor is great when I get past the roughness of the hops in the finish. That is something that I am especially sensitive to in my beers and I think many people would miss it if I didn't mention it. I sent this off to a competition, where it scored better than I expected, and one of the judges said something briefly about some astringency, but didn't talk about rough hop flavor or anything like that.

I think the big thing to work on with this batch for me is the rough hoppyness. I've gotten that recently with another beer without any pre-primary souring and with a comparable hopping regiment, which leads me to believe it is primarily driven by what is happening with the hops and not the pH of the boil. I've had similar hop amounts at similar timings to this batch without any problem, and have also noticed with previous batches that if I get too much hop material carryover into the fermenter than I am prone to getting this flavor, so I think that may e the big issue.

The roughness is in the lingering aftertaste after the finish and if I'm not thinking about it I can not notice it. And then I think the beer is great. After this batch I switched to hop bags to try to limit hop material getting into the fermenter (partially driven by switching boil kettles) and I haven't run across the hop roughness anymore. Some batches have worked great, like the re-brews of my Belgian single and petite saison, but I also have had batches coming out less hoppy than I'd like, leaving something missing. I'm not totally happy with the hop bags and am still looking for a better solution to keep hops out of the fermenter while getting the hop character I want.

So overall the beer is good but not up to my standards. But I don't think much (or possibly any) of that has to do with the method of getting acidity. The 1st attempt at sour-worting was a reasonable success even if the overall beer didn't hit the target.
Posted by Dave at 10:39 PM