I always find writing tasting notes on my beers tricky as I often don't have the time/energy to sit down and write out formal notes and when I'm having a beer I am generally giving most of my focus to something else. I'll get a good impression drinking multiple bottles from a batch over time (and to some extent observing the progression can be equally valuable). I'll generally write a line or two to record my overall thoughts, but having a more detailed and critical assessment can be really helpful in building subsequent batches and other recipes. And it is something I'd like to do for every batch. Having this blog helps a bit as it forces me to go through the full review process for recipes that make it up here.

So here is my review for a saison with locally grown and malted barley and a small amount of sea salt added that I am calling Seaside Saison: 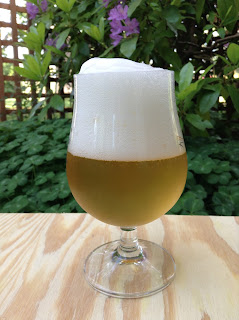 Aroma: Great floral/fruit aroma. It is a bit minerally (though this is something that I am looking for in this beer, so that might influence it). There is a Dupont-esque edge in there but this is more earthy. The beer as a nice graininess with some tangy fruit (lime). Overall it is a touch on the sweet side with some toasty grain. It smells tarter than it tastes. Some alcohol seems noticeable in the aroma which surprised me a bit given that the ABV isn't very high.

Appearance: Beautiful fine white head, excellent retention, leaves a chunky lace. The color is a pretty clear gold. I am really happy with the appearance of this beer.

Taste: Over-ripe fruit is forward in the taste (peach, cherry and other stone fruit) along with floral and some citrus (lime comes forward). I like the fruityness here. The beer is mildly tangy, which might be influenced by both acidity and salt. There is some mild but present alcohol. It is subtly but identifiably minerally. I think the salt is at the right level for what I am looking for. The hop presence is pretty low - a bit lower than I'd like and lower than what I expected given the recipe. Perhaps this is influenced by this beer having a much different SO4:Cl balance than my saisons normally do. I'll probably bring the hops up a bit next time. There is some roughness in the finish that I think the salts accentuate a bit. There are some clove-like phenols, which aren't really the type of phenols I am going for.

Mouthfeel: High fine carbonation. This beer has a great mouthfeel - light and fluffy with some creaminess (which I presume is from the flaked grains but it might be helped by the salt as it is more creamy than other recent brews with a similar amount of flaked grain). Dry finish with a fruit skin like character and a light tangyness (probably a combination of salt and acidity).

Overall: This is pretty nice overall and it hit the mark on the general goal very well. The salt amount seems right on (maybe it could be a touch lower but not higher). Now the beer needs some fine tuning. I'll need to take a new run at the fermentation with a different yeast blend (probably back to just using 3724 and 3711). I'm getting a bit more phenolic character here than I want and/or they aren't the right phenols. So dropping the 3726 should help this. And I'll also try to get a bit more crispness and take out some of the roughness. I think the beer needs a bit more hop presence. That should add some crispness. Driving the FG down a bit would also help here and possibly remove some of the perceived sweetness in the balance. I like the graininess and will keep the grist as it is.

I like the OG being in the mid 1.040's, so I'll leave that there. I don't know where the perception of alcohol is coming from. It might be leaving the fermentation warm with these yeasts, or yeast health going in, or pitch rate or something like that. But that is something I'll have to work on. It isn't strong but it is in there and I'd rather it not be. I see a similar sort of alcohol presence in the Dupont beers, but for some reason there it doesn't bother me as much.

So overall success with some room for improvement.
Posted by Dave at 8:25 PM